Been a bit of a long time between blogs, as I've been held back waiting for my next batch of components to arrive.

I've had on order from MXUS, my supplier in China:

And from T-Whites Bikes in Auckland:

The first problem I ran into was actually with YouShop in China. They were claiming that my package had never arrived in their warehouse. After a bit of back and forth with customer support (and sending them an electronic copy of their own acceptance signature), they "found" my parcel. Immediately afterwards I was made to pay ($17) for a magnetic goods inspection report, a requirement for electric motors leaving Chinese ports.

After that was all sorted, it didn't take for the parcel to turn up in NZ. 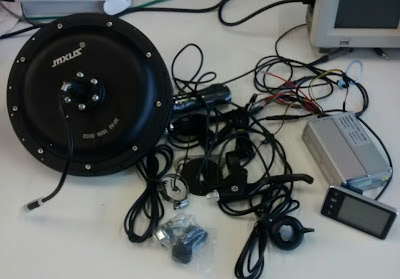 Immediately I plugged the system in, and checked the motor spinned.


The observant will notice that the speedometer doesn't change when the motor is going (hopefully this video starts working).

T-White's distributor/importer ended up bringing in the wrong (i.e. more expensive) rims, but thankfully they agreed to sell me the fancy ones for the price we originally agreed. Here they are, sitting in the shop, about to be threaded up. 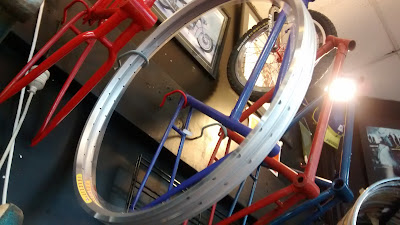 All things going well, the next post will be of a moving e-bike!